The following story appeared in The Lakeville Journal of September 4, 2014, and is reproduced here with permission.  See our earlier post about using a drone to explore the Beckley Furnace site from an aerial view.

LAKEVILLE — Technology and history collided last month when area historian Dick
Paddock attempted to use a tiny drone to inspect the skylight and furnace stack
of Beckley Furnace in East Canaan.
“A 40-foot ladder won’t reach the top of the furnace, and we didn’t want to
build scaffolding,” Paddock said. “I had seen these drones online and thought
they might be able to fly up the flue. That would be a quick, inexpensive
solution.”
Paddock purchased a remote-controlled Blade 180 QX HD quadcopter (named for its
four rotors) for approximately $180. It included a camera that can take both
photos and videos.
He discovered on Aug. 16 that the drone could indeed fly up the flue, but was
unable to take photos due to poor lighting. He then sent the quadcopter soaring
toward the skylight, only to have a gust of wind flip the device onto Beckley
Furnace’s roof.
With the drone stuck out of reach, Paddock went to the Buy Local trade festival
at The Hotchkiss School on Aug. 17 and told Visionary Computer owner David
Maffucci of his plight. Maffucci mentioned that Shawn Takatsu, an Apple
certified support professional at Visionary Computer, flies quadcopters as a
hobby.
“I’ve been flying RC copters for number of years,” Takatsu said in a phone this
week interview. “I saw a video of a GoPro camera attached to one of these
quadcopters and thought it could take my hobby a bit further.”
Takatsu’s large DJI quadcopter dwarfs Paddock’s drone. It costs around $2,500
with modifications and has a legal range of 400 feet high and 1,000 feet out in
line of sight.
“I told Dick that I’d love to help,” Takatsu said. “What a great cause!”
Takatsu was able to use the wind from his massive rotors to safely blow
Paddock’s drone off the roof on Aug. 24.
“There was a little damage, but it’s easy to fix,” Paddock said. “It will fly
again. The camera is serviceable. It was a successful rescue.”
While he was at Beckley Furnace, Takatsu used his quadcopter to take some aerial
shots that included photos of the skylight and the entire park.
“We got a good outline of the whole site thanks to Shawn,” Paddock said. “We’ve
never had a picture before that shows the entire span of the industrial
monument.”
Paddock plans to send his small drone up the flue again now that he’s worked out
the lighting problem. He said all of this information will go in the record of
the Beckley Furnace, and inspections will continue on a regular basis.
As for anyone who may be interested in flying drones, Takatsu said they can be
found online for as cheap as $30, or go as high as $20,000 for massive
octocopters.
Takatsu’s quadcopter photography services are available to hire through his
Northwest Connecticut Aerial Photography website, www.nwaphoto.net.

Our sincere thanks to The Lakeville Journal

Looking at things from a different angle…

We’re always looking for better ways to help visitors understand how Beckley Furnace worked.  Fact is that few of our visitors are intimately familiar with the process of making iron ore into pig iron, and putting all the pieces together can be a little problematical.  And, unfortunately, some pieces of the puzzle of just how the entire furnace worked are missing.  Sometimes, we’ve found, looking at things from a different angle can help with this. 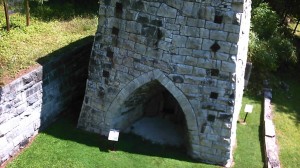 As it turns out, Dick Paddock and Christian Allyn, two members of the Friends of Beckley Furnace, have recently been experimenting with our version of a drone — actually, a little remote controlled helicopter that can carry a camera — as a way to explain things better.

The photo above is one of their early efforts — this one, about 60 feet in the air, looking down at the casting arch.  You can see a portion of the exterior wall of the building in which the furnace was located on the left and right of the stack (and see the remainder of the outline of the casting house outlined in limestone elsewhere on this site.)

We think that viewing things from above suggests a lot of possibilities, such as showing the spatial relationship between the  turbine location and the furnace — and even the slag heap — in a single photo.  Stay tuned!  We’ll have more!!

And thanks to Dick and Chris for making this happen!