Just what is that gray thing in the shed, up near the dam?

It wasn’t there last year! 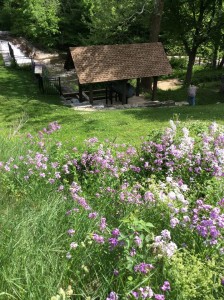 Well, you’re right.  We built the shelter for the gray thing over the winter, and we dedicated it this summer.  And the “gray thing” is NOT a bomb (as one visitor suggested) or a jet engine (which it also resembles both functionally and in appearance).  Instead, it’s a turbine.  A water-power turbine that was used for the final decades of Beckley Furnace’s active life to power the hot blast.  Actually, it’s one of two turbines at the Beckley site.  Read about the other turbine here.

The turbine has an interesting story, and we’ll be telling you more about it later on, but here are a few items you might find interesting right now:

–It was a “Hercules-type” turbine, of unknown manufacturer, probably installed when the dam was rebuilt in the 1870s.

–While it looks pretty massive on the display rack, it was considered a powerhouse for its day, generating (we think) about 80 hp.  (A nice thing about turbines — they can generate lots of power even when the water input is reduced due to drought.)

–This turbine had spend nearly 90 years buried in the mud in the pit where it operated.  It was evidently too heavy to be removed for scrap metal during the Second World War.

–After getting expert advice about how to conserve this rarity, we concluded that in order to preserve the interior we needed to cut a hole in the side.  Fortunately, that gives you a good view of the inner workings of the device.

–Yes, that wooden thing at the lower end of the turbine is just what it looks like: a washer.  It’s made of a tropical wood called lignum vitae that withstands the kinds of forces this turbine exerted, and to do it in water, too. 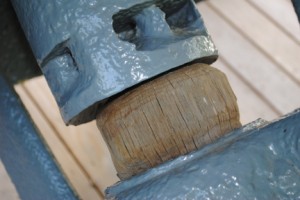 One thought on “What’s the gray thing ….”