Thanks to our friends at the Canaan/Falls Village Historical Society for coming up with this YouTube video that originally appeared on Connecticut Public TV.

Shot in the 1990s, it features faces that are familiar to those associated with Beckley Furnace over the years.  The faces (and voices) of Ron Jones, Ed Kirby, the late Fred Hall, and the late Fred Warner, are notable.  The furnace itself appears in the starring role, which is perfectly reasonable!   After all these years, and despite some initial flickering in the video, even if you actually watched it on CPTV, it’s well worth viewing again.

A few things to watch for, besides the four men mentioned earlier:  There are several views of the furnace with scaffolding around it during the restoration process.  Note the masons at work on on the furnace.  In the early years after restoration we had a chain link fence around the furnace, which made it a lot less photogenic — and you can see that fence in place in these views.  The account of why the Bessemer process of steel making was established in Pennsylvania instead of Northwest Connecticut is particularly poignant.

2016 is the 20th Anniversary of the founding of the Friends of Beckley Furnace, and of the Preservation of the Furnace.

In this special year:

During this year, we’ll be sharing with you photos and other artifacts from Beckley’s past, as well as those relating to the preservation efforts themselves.  We’ll bring you recollections of those who were most closely involved in saving this structure — and the whole Beckley complex — from the effects of the passage of time. We have a few special projects in the works as well, including events you’ll want to attend.

You’ll see more here soon about these activities, so come back often!

Of course, during the year we’ll continue to do what we do all the time and have done for the past 20 years:

–Welcome visiting school groups, historical societies, and other groups with presentations and tours targeted to their interests.

–Add resources to this website about the history of Beckley Furnace, the iron industry, and our place in the world of the Upper Housatonic Valley and the world.

–Research our site and our area to learn more about how iron was made here — and what else went on here as well.

–Create media, especially video, to make the history clearer and easier to understand.

–Collaborate with other organizations, like the Falls Village/Canaan Historical Society, the Upper Housatonic Valley National Heritage Area, the Salisbury Association, and a host of others.

The feedback we receive from visitors, as well as our own experience, tells us that while words are necessary, and photos are great to have, nothing conveys a message quite like a video.  Our two youngest board members, Christian Allyn and Eleanore Jenks, have decided to take advantage of this and to create some more videos for the site.

See the video Christian and Eleanore made about slag!  Go see that right now!!

Christian, as many visitors know, is our main docent for the summers.  He’s a student at UConn, and as well being an expert on the Beckley Furnace site, has a family background that includes quarries that produced some of the limestone that fed Beckley Furnace, back in the day, and still produces limestone up the hill on the other side of Route 44. 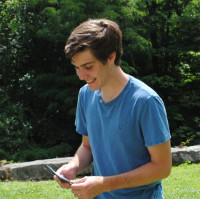 Furnace as long as he can remember, and has been a key member of  our summer staff for the past four summers.  Did we say that he knows a lot about Beckley Furnace and the iron industry?  Well, he definitely does!

He also has some expertise that none of the rest of us at Beckley has:  he knows about plants — in fact, his majors at UConn are in that area, and during his years at Housatonic Valley Regional High School (where he also volunteers in developing the school archives) he was particularly active in FFA.

For many of the videos planned as well as two that are already “in the can,” Chris is (usually) the presenter and tells us what we need to know.

Eleanore, our youngest and newest board member, is still in high school in New York City.  Her ties directly to Beckley, while nowhere as lengthy as Chris’ ties, are still substantial.  In fact, you would not be reading this material if it were not for Elli and her hard work and creativity, because she was the designer and builder of the Beckley Furnace website, and do 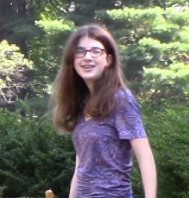 es most of the maintenance on the site as well.   The welcome video for this site was her work, all the way from the filming, to the voiceover, to the music, to the post processing.

Elli’s family background includes some significant portions of heavy industry as well.  A likely distant ancestor was a major player in the Saugus Iron Works in Massachusetts Bay Colony in the 1600s, and more recently another ancestor held a patent on making cinder blocks (which, like the products of the New England Slag Company, another East Canaan Barnum and Richardson business, are a repurposed industrial waste product).  And just as Chris lives within a stone’s throw from a limestone quarry, Eleanore lives a stone’s throw from the site of one of the 26 blast furnaces that once dotted the Salisbury Iron District, of which, of course, Beckley Furnace was one.

As you might have guessed from her work on the website, Elli is mostly (but not entirely) involved in the videography of this new video series.

As well as the upcoming videos, there’s another project the two have in mind.  It’s something that all smartphone users will appreciate.  They are planning a series of QR codes posted around the Beckley site that people with smartphones will be able to click on and be connected automatically to material on this website about the items in the area where the QR code in question is posted.  It’s not economically possible to create permanent signs for many aspects of the Beckley Furnace complex, and we think that the use of QR codes will help us provide information to visitors quickly and economically.  We’re thinking about the slag pile and the Leffel Turbine as likely candidates for QR codes of their own, but there will certainly be others.

So, thanks to Christian and Eleanore!!! 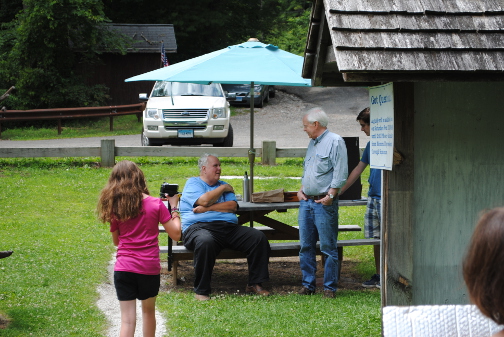